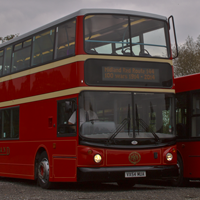 In 2014, a number of First Group companies were repainting some of their fleet into Heritage livery and it was decided First Midland Red would do the same. The first vehicle painted was Dennis Alexander Enviro300, fleet number 67664 (registration number VX05LWH), which was painted in overall red livery as used by BMMO in the late 1960s and early 1970s.

Two weeks later Dennis Trident fleet number 33404 (registration number VX54MUA) was sent to the body shop for an overhaul, and soon after was sent to a paint shop near Hereford for repaint. On Thursday 9th October 2014, she returned in red BMMO livery with silver roof, cream bands and gold outlining. She was stored for two weeks waiting for graphics to arrive, and was then fitted with gold pre-war “Midland” fleet names and gold “Midland Red Motor Services” belt-buckle logo, as used by BMMO on double-deck buses in the 1930.

A press event on Wednesday 15th October 2014 officially launched the two heritage livery buses. The event saw a number of company and council officials, along with preservation groups and retired staff, invited to celebrate 100-years of Midland Red services in Worcester by riding on the two heritage vehicles on a short version of service 144 between Worcester and Droitwich Spa. The Transport Museum at Wythall provided a number of preserved buses on hire, and one of these, SOS “SON” registration number GHA337 also took passengers on the short 144.

At the time of launch, a number of transport enthusiasts expressed a wish to see the wheels of both heritage buses painted red to make the livery more authentic. Unfortunately, this was not logistically possible because all vehicles in the First Midland Red fleet have their tyres and wheels maintained by an outside contractor, and thus wheels are often changed between vehicles outside of the control of First.

For the model makers, the bodywork is painted in ICI N448 RED, and the roof is RAL9006 SILVER.