In July 1983, Midland Red (West) Limited purchased FEH1Y, a Leyland Tiger with Plaxton Paramount 3500 bodywork. This was the first new vehicle acquired by Midland Red West since the formation of the comapany after the Midland Red Omnibus Company Limited (MROC) was split up on 6th September 1981. The vehicle was allocated the fleet number 1001 and immediately became the flagship of the companies coaching activities, an area of business which was actively being developed after being run down by the old Midland Red Omnibus Company Limted.

1001 remained in service with Midland Red West until February 1997, when it was passed to Eastern Counties at their Rosemary Coaches subsidiary in Kings Lynn. She has since been withdrawn and scrapped. 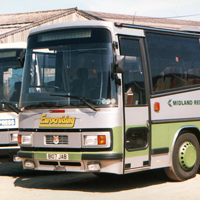 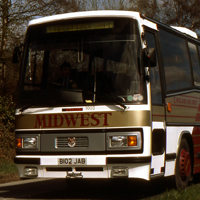 In March and April 1985, Midland Red (West) Limited took delivery of another six Leyland Tiger coaches, these were all finished with the Mark II version of Plaxton Paramount 3200 body and were delivered in three different liveries and with different seating layouts.

Like 1001, during their time with Midland Red West these vehicles carried a number of different liveries and branding, with all of them carrying National Express “Rapide” livery at some time. However by 1993, they had all been repainted into overall red Midland Red West coach livery with “Midland Red Coaches” branding, and in the mid-1990s they were refitted with new seats.

When Midland Red West closed their coaching activities in 1997, vehicles 1002 and 1004 were sold, and fleet number 1003 had already been stolen by this time, but the remaining three vehicles, fleet numbers 1005–1007, remained with Midland Red West for use on school and contract services.

Fleet number 1003 was finally recovered by the police in 1999, and re-entered service in Midland Red West bus livery at Evesham depot, while fleet number 1007 was destroyed by fire in February 2001. By the end of 2005, all remaining examples of these vehicles were withdrawn, with 1003 and 1006 being sold in early 2006 and stored for several weeks at Worcester depot before it was also sold.

Vehicles Acquired with the Business of Midland Red Coaches

LOA832X had originally been numbered 832 in the Midland Red (Express) fleet, renumbered to 532 on Saturday 1st January 1983. She passed to Midland Red West Limited when the two companies merged as fleet number 1008, with C51F seating and carrying National Holidays livery. See the “Midland Red Express - Leyland Tiger” section of this website for details of this vehicle before this time.

In January 1987, less than a month after passing to Midland Red West, she received National Express livery and in May of that year was fitted with a toilet, becoming C46FT.

In August 1993, she was downgraded for bus work, being fitted for one-man operation and repainted to red and cream Midland Red West bus livery. She moved to Kidderminster depot for use mostly on the long service 192 which operated between Hereford, Leominster, Ludlow, Kidderminster and Birmingham at the time. In May 1997 she was withdrawn and sold to Western National.

Numbered 590 in the Midland Red Coaches fleet, and passed to Midland Red West with C50FT seating in National Express livery.

She was loaned to Wessex National, Bristol from 12th April 1990 until 19th September 1990, and repainted into overall red Midland Red West coach livery with “Midland Red Coaches” branding in November 1990. In the mid-1990s she was fitted for one-man operation and downgraded for bus and school work as C53F in red and cream Midland Red West bus livery. It was finaaly withdrawn from service with Midland Red West, renamed to “First Midland Red Buses Limited” by this time, in September 2002.

Numbered 595 and 596 in the Midland Red Coaches fleet, and passed to Midland Red West with C44FT layout in National Express “Rapide” livery. They were loaned to Wessex National, Bristol, from Sunday 1st November 1987 to November 1988, again from Saturday 22nd April 1989 to Tuesday 31st October 1989, and again from Monday 12th March 1990 to Wednesday 31st October 1990.

Both vehicles were re-seated to C50FT in Feburary 1991 and recieved overall red Midland Red West coach livery with “Midland Red Coaches” branding around the same time. In the mid-1990s they were fitted for one-man operation and downgraded for bus and school work with C53F layout in red and cream Midland Red West bus livery. Both vehicles were withdrawn in 2003, with 1012 expected to be reinstated with the driving school, but that never happened and it passed to First Beeline, Slough, in August 2003.

In March 2004, fleet number 1012 returned to the First Midland Red fleet at Evesham depot. This was the same time as First Midland Red were renumbering their fleet to the five-digit national fleet numbering system, and although 1011 had been withdrawn and stored for almost a year at this time it was allocated the new fleet number 22015, but surprisingly 1012 was not given a new fleet number and continued to carry 1012 until it was withdrawn in June 2004. Both vehicles were stored for a long time, with 1011 (now numbered 22015) being sold for scrap in August 2004, and 2012 passing to Wellington (Tally Ho Coaches), Kingsridge, via a dealer, in June 2005.

Both these vehicles were withdrawn and sold by Midland Red West in 1997 when they closed their coaching unit.

Numbered 566–568 in the Midland Red Coaches fleet, passed to Midland Red West with C50F seating in National Holidays livery. All three of these vehicles were repainted April 1987 to National Express livery and were re-seated to C48F at about the same time.

All three of these vehicles were withdrawn by Midland Red West in December 1996, and sold soon afterwards.

HUA607Y was one of four Leyland Tiger coaches with C53F Plaxton Paramount 3200 bodywork new to West Yorkshire PTE (WYPTE) in May 1983. On de-regulation the bus division of the WYPTE renamed to Yorkshire Rider and this coach operated in their Calderline fleet. In June 1998, she passed to Midland Red West Limited at Evesham depot, still in Calderline livery, but was soon repainted to red and cream Midland Red West bus livery.

867 was withdrawn in January 2003, and was stored for a long time at Evesham depot awaiting disposal. While in storage she was heavily vandalised, and was renumbered to fleet number 22017 in March 2004, although this number was never shown on the vehicle as it never re-entered service. In August 2004, she passed to PVS of Carlton for scrap.

Fleet number 1000 was acquired in September 2003 for a school contract in Kidderminster, which required a seat-belt fitted coach (previously 1012 was used for this). The vehicle was new to Southend Transport in 1984 as a 57 seater, with fleet number 251. She Passed to Arriva The Shires and Essex upon takeover of the British Bus Group, and she was renumbered to 4312. Withdrawn in 2001, she ending up with Stephensons of Rochford as dealer stock before passing to First Midland Red Buses Limited.

1000 was fitted with seatbelts shortly after passing to First Midland Red and entered service at Kidderminster depot, being used mainly on Service 827. She did not last very long at Kidderminster, and by the end of 2003 she had been moved to Evesham depot. On 13th March 2004, she was renumbered to fleet number 22000 in the FIrstGroup national numbering system, and was scheduled for withdrawal at the end of the school term in July 2005, but was reinstated in September due to a shortage of vehicles suitable for operating school services, finally being withdrawn and sold by April 2006.

For information about Leyland Tiger buses and coaches operated by other “Midland Red” companies, visit one of the links below.