In Spring of 2014, FirstGroup announced that they had placed a £70m order for 425 vehicles to be delivered in 2014 and 2015. The order included 274 Wrightbus StreetLite Micro Hybrid buses, which the press release claimed was the “world’s most fuel-efficient bus.”

Eight of the new StreetLite Micro Hybrid buses were earmarked for allocation to First Midland Red at their Worcester depot, and this interestingly was to include one prototype example fitted with a Euro-6 compliant engine. All of the examples for Worcester would be DF layout (“Door Forward”) with 10.2m wheelbase, and built to high specification with full leather B37F seating, CCTV system and drivers’ air conditioning.

On Friday 29th May 2015, FirstGroup announced an additional £77.7m investment for 385 new buses. This order included an order for 183 Wrightbus StreetLite single-deck buses, all to be built with Euro-6 engines. First Midland Red Buses Limited were initially allocated thirteen vehicles from this order, but before deliverys started they exchanged four examples with Leicester Citybus Limited (“First Leicester”) for an equal number of Wrightbus StreetDeck double-deck buses. 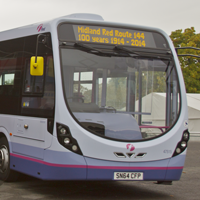 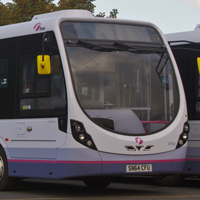 Between 18th and 24th September 2014, the first seven examples were delivered to Worcester (Padmore Street) depot and were immediately placed into storage, pending a launch to the public and press scheduled for October. Unfortunately, the delivery of these vehicles coincided with major changes to the vehicle licensing system by the DVLA, and although all vehicles were to be taxed by the manufacture on delivery, First were unable to confirm this had been done for several days and thus none of them could be used. Other delays were caused by the fuel system which required the pumps in the depot to be upgraded with new nozzles, and until this was done none of the vehicles could be refuelled.

With these obstacles overcome, driver training started on Monday 6th October 2014, with fleet numbers 47513 and later 47519 (registrations numbers CF64CFM and CF64CFY) being used.

On Wednesday 15th October 2014, fleet number 47515 (registrations number CF64CFP) was used as a static display during the Midland Red Heritage day. This event saw First Midland Red hire a number of preserved buses and repaint two vehicles to Heritage livery to celebrate 100 years of direct bus services between Birmingham and Worcester, and it also provided the company with an opportunity to show off the new vehicles to press and invited guests for the first time.

A dedicated launch for the general public in the centre of Worcester City on Thursday 23rd October 2014 had to be cancelled due to the intended launch site, the old Angel Place bus station, being dug up by the City Council and resurfaced. With no need to wait for this event, the batch drifted into service a few vehicles at a time starting with fleet number 47517 (registrations number CF64CFV) from Tuesday 21st October 2014. 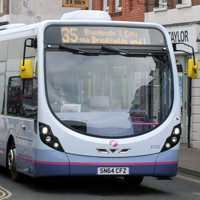 Originally, the eighth vehicle in the batch should have been a prototype fitted with a Euro-6 specification engine. Delivery of this vehicle wasn’t expected until the end of November 2014 as the vehicle was being exhibited at the Commercial Motor Show at the NEC in Birmingham.

However, at the Midland Red Heritage Day on Wednesday 15th October 2014, it was announced that this vehicle would no longer be used at Worcester but would instead be allocated to First Potteries Limited, Stoke-on-Trent. First Midland Red would still be testing a prototype vehicle but this would have an identical mechanical specification to the other vehicles at Worcester and feature a lightweight body.

On Wednesday 29th October 2014, fleet number 47520 (registrations number CF64CFZ) arrived at Worcester depot, and to look at, it is identical to the seven vehicles already in service at Worcester. The only signs that this vehicle is different are the fitting of electrically operated passenger doors, replacing the air operated ones on the other vehicles, and the use of dimming interior lights. The latter is a welcome addition as the bright interior lights on the earlier buses make driving at night very difficult.

Unseen changes to this vehicle include a number of weight-saving features, such of the use of thinner gauge metal for hand-rails, and a lighter material used for the floor. Overall, this vehicle is 70kg lighter than the others in the fleet.

This vehicle entered service at Worcester depot on 3rd November 2014, and initially had problems with the electric doors partly opening sometimes when the vehicle went over a bump in the road. This would cause the brake interlock to activate bringing the vehicle to a sudden stop. The issue caused the engineers quite a few headaches and the vehicle spent quite some time off the road, but had finally been rectified by the Spring of 2015. 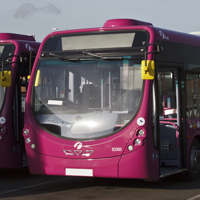 First Midland Red Buses Limited were to take delivery of nine new B41F Wrightbus StreetLite Max single-deck buses from the week starting Monday 30th November 2015, but due to a mix-up with manufacture Wrightbus some of these vehicles were registered incorrectly.

At the time, sister company First Potteries Limited were in urgent need of DDA compliant single-deck buses in time for a change in the law on Friday 1st January 2016. With the introduction of these new buses, a number of Alexander Dennis Enviro300 single-deck buses were due to transfer to Potteries but this would be delayed if the errors were corrected with the DVLA as vehicles can not be taxed until it is done, so FirstGroup opted to put the vehicles in service with whatever operator was shown on the v5 document to immediately free up vehicles for Potteries. It is planned that the mess will be sorted out in the New Year by swapping vehicles between First Midland Red and First Leicester where required.

These vehicles are the StreetLite Max version and therefore have a longer wheelbase than the vehicles acquired in 2014, so seating capacity is increased to 41. Normally the StreetLite Max has a seating capacity of 45, which puts them on par with other vehicles of a similar size in the fleet, but FirstGroup chose to order these with the lower capacity in an effort to increase passenger leg room and give greater comfort.

They are also the second generation of the StreetLite design built by Wrightbus and are therefore built to a revised specification, most notably using the 4-cylinder Daimler 208hp OM934 Euro-6 engine instead of the 4-cylinder Cummins 207PS ISBe5 Euro-5 engine found in the previous batch.

The first vehicle, fleet number 63356 (registration number SM65LNO) was delivered to Worcester (Padmore Street) depot on Saturday 5th December 2015, in the new “Urban 2” livery, with Leicester also getting their first example (fleet number 63345) on the same day. The examples at Worcester will be used mostly on the Worcester to Malvern group of services along with the Wrightbus StreetDecks, which entered service on Monday 16th November 2015.

By Friday 11th December 2015 a full allocation of nine examples had been delivered to Worcester (Padmore Street) depot, although these were not the correct nine! These were fleet numbers 63346–63348 which were registered to Leicester Citybus Limited (“First Leicester”), and 63356–63361 which were registered to First Midland Red Buses Limited, although the first two of these needed to go to First Leicester.