With the exception of the four vehicles that entered service in the “WyeS Moves” livery, all Optare Solo buses purchased by First Midland Red carried the standard FirstGroup Corporate “Barbie” livery of white and blue with a magenta band from new, and this livery was used on the WyeS Moves vehicles when that livery came to an end. In 2013, First Group started to phase out this livery in favour of a new design. 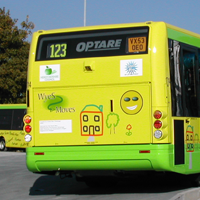 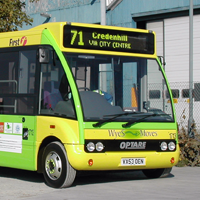 This unusual livery was designed by Shannon Round of Marlbrook Primary School in Hereford. It was the winning entry in a competition set by Herefordshire Council to design a new bus livery for the “WyeS Moves” inter-community services in the South Wye area of Hereford that came into operation on 27th October 2003.

The livery is overall yellow with the first bay, windscreen surround, and horizontal roof band being lime green. The places served by the “WyeS Moves” services are shown along the sides in a hand-writing style type face, and a hand drawn house, tree and flower are shown behind the rear axle and on the rear.

Four vehicles, fleet numbers 1713-1716 later renumbered to 53059-53062, carried this livery from new, and all four are allocated to Hereford (Friars Street) depot. In July, August and September 2008, all four of these vehicles were repainted to standard FirstGroup “Barbie” livery. 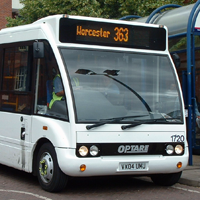 The other two vehicles leased by Worcestershire County Council, fleet numbers 1722 and 1723, and operated for them on “flexiLINK” services by First Midland Red since March 2005, carry orange and blue flexiLINK livery. 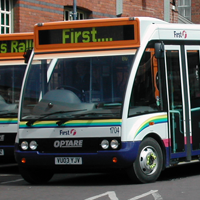 All ten of the Optare Solo minibuses originally allocated to Worcester depot from new entered service with orange route branding for Services 41, 43 & 43E. Service 43 & 43E operated every 10 minutes from the Dines Green estate on west of the city, to the City Centre, and through to Warndon on the east of the city. Every second vehicle (Service Royal Hospital and Ronkswood estate at a 20-minute frequency. Service 41 operated over the same route but in the opposite direction.

On 18th April 2004, First Midland Red reorganised their local Worcester City services, withdrawing 41, 43 & 43E services and replaced them, in part, by an extended Service 31 that operates between Warndon and Henwick Park via the Royal Hospital. The orange route branding on these vehicles had been due to be updated on the Sunday before the changes, however when the contractors arrived at Worcester depot to carryout the work they found the depot empty as the engineers were attending a brake down, so went home. These vehicles therefore operated for a week with the old branding, which caused much confusion with the public.

During the second week of June 2005, the route branding on these vehicles was again changed ready for changes to the Service 31 route on the 12thth February 2006 when the frequency was reduced to every 15 minutes. On both occasions, the number of vehicles required reduced so some vehicles had their route branding removed.