Operating alongside the popular Leyland National and the unique and distinguished range of BMMO designed vehicles, it not surprising that history has largely overlooked the 141 examples of the Ford R192 and R1014 buses operated by Midland Red on quiet rural services throughout the 1970s. However, the unusual M2 and M3 conversions carried out at Midland Red’s Central Works on a handful of these vehicles from 1977 has ensured that the Fords will never be completely forgotten, with one of these odd-looking vehicles being saved for preservation at Birmingham and Midland Motor Omnibus Trust (“The Transport Museum”—BaMMOT), Wythall. 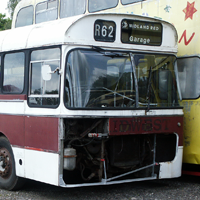 PHA370M was part of the third and final batch of Fords, type code F3, new to Midland Red Omnibus Company Limited (MROC) entering service at Tamworth (Aldergate) depot in May 1974 with fleet number 370. She remained at that depot until November 1976, being first given a Engineering Float allocation then moving to Wellington depot in August 1977.

In May 1979, she was taken to Midland Red’s Central Works at Carlyle Road in Edgbaston, Birmingham and underwent a type M3 conversion. The work was finished in September of that year and 370 re-entered service at Redditch depot the following month.

By September 1981, when Midland Red Omnibus Company Limited ceased trading as a bus and coach operator, 370 was allocated to Evesham depot and therefore passed to Midland Red (West) Limited where she remained in service until November 1982. At this time, she was withdrawn and refitted as DP23F+Tables using seats salvaged during the re-seating of some of the Leyland Leopard coaches, the one-man operation equipment was removed and she was repainted in overall white livery, re-entering service in September 1983. She was again repainted in December 1985, this time into the white, gold and maroon “MidWest” livery, and was used as a mini coach until being finally withdrawn in February 1990.

370 was stored for some time in the yard behind Evesham depot before being passed to Birmingham and Midland Motor Omnibus Trust (“The Transport Museum”—BaMMOT), Wythall. In 2005, the vehicle was repainted but was only ever used as a static display, but in mid-Feburary 2017 it passed to Steve Riley on long-term loan.

The loan agreement between BaMMOT and Steve Riley has been made for an initial period of 10-years. The vehicles is currently housed at Steve’s facilities in Uttoxiter and is now undergoing restoration, which should see it returning to the road. Initial reports suggest that it requires numerous small jobs, a complete brake overhaul, and replacement to the wood sections of the bodywork frame. This latter problem is mostly between the vehicle axels which would suggest MROC used low quality materials when the vehicle was shortened in 1979.