In the 1950s, Bedford, who was owned by General Motors — Ford’s biggest rival, enjoyed almost unrivalled dominants in the UK lightweight coach chassis market, and Ford believed the market would appreciate more choice. In December 1958, Ford started production full-size, lightweight bus and coach chassis at their Dagenham assembly plant. These early Ford chassis were based heavily on the company’s Thames Trader forward control goods chassis and were offered with either the vertical Ford 6D 100hp diesel engine or vertical 114hp petrol engine, mounted in the front of the chassis.

In October 1963, Ford introduced their first 36′ chassis, the Thames 36, to rival Bedford’s six-wheel twin-steer VAL. Although this new Ford design sill shared many components with the Thames Trader goods vehicles, it did come with a new 9,000lb front axle which was set 74″ back in the chassis to allow front entrance doors for the first time.

The Thames Trader chassis range was discontinued in July 1965, and replaced with the D-type chassis for goods vehicles, and the R-type chassis for buses and coaches. At this time, the Thames 36 was renamed to the R226, because it had a 226″ wheelbase. A shortened version of the R226 chassis with a 192″ wheelbase was also introduced, named the R192, and this could be fitted with 32′ bodies, accommodating up to 45 seats. Initial engine choices were either a 130hp petrol engine or a 115hp diesel, both coming with a five-speed Clark gearbox. The R192 was also offered with a smaller 104hp diesel engine which had a four-speed Ford gearbox. From August 1968, the company replaced these engines with a turbocharged version of the 115hp diesel, which increased power output to 141½hp, and the standard gearbox became a five-speed Turner unit.

The Ford designs were never considered to be very sophisticated, being quite basic but soundly engineered. They offered good value for money and were very popular with smaller operators, so it was quite surprising when BMMO placed their initial order for one-hundred vehicles in April 1970. All the Ford chassis operated by Midland Red were the 192″ wheelbase variation fitted with the 141½hp turbocharged diesel engine. In August 1971, this model was renamed from R192 to R1014. At this time, the five-speed Turner gearbox was replaced with a four-speed all-synchromesh Ford gearbox, but otherwise the Ford R192 and the Ford R1014 were the same design, and the model name was changed for the new metric system: ‘10’ for ten-metre chassis length and ‘14’ for 141½hp turbocharged engine.

BMMO acquired 140 new Ford R192 and R1014 buses between 1970 and 1974 in three batches. In addition to these, MROC also acquired one second-hand Ford R192 with the business of another operator in 1974. In the late 1970s they also converted a number of these vehicles to B27F midibuses by reducing the wheelbase and rear overhang.

By 1970, the Birmingham and Midland Motor Omnibus Company Limited (BMMO—Midland “Red” Motor Services) were winding down production of their own vehicle designs and were purchasing buses built on the Leyland Leopard chassis to replace their ageing fleet of BMMO S14 lightweight single-deck buses from the mid-1950s. However, deliveries of the Leyland Leopards had fallen behind schedule and a large number of new vehicles needed to be acquired in a hurry. At the time, Ford’s bus sales in the UK were mainly in small numbers to independent operators, and Ford were very keen to secure large orders in the face of strong competition from Bedford, AEC and Leyland. Because of this, Ford were willing to make BMMO a very attractive offer with short delivery times, and in April 1970, BMMO placed an order with Don Everall (PSV) Limited of Wolvertampton for one-hundred examples of the Ford R192 fitted with B45F Plaxton Derwent bodies. The first vehicles were delivered just over six months later, and entered service as type code S25 between November 1970 and April 1971.

Having only forty-five seats, as opposed to the fifty-three seats found in the BMMO S-type vehicles, meant that some senior staff opposed the purchase of these vehicles. However, they soon found a home on rural routes, which did not require large capacity vehicles, operating mainly form Banbury, Evesham, Hereford, Kineton, Ludlow, Rugby, Shrewsbury, Stratford-Upon-Avon and Wellington depots. Being used exclusively on rural services, none of these vehicles passed to WMPTE with the transfer of Birmingham operations on 3rd December 1973, and with the subsequent reorganisation and renaming of the company that follow, they were reclassified to type code F1 in 1974.

In December 1972, BMMO acquired another twenty Ford buses. These were the later R1014 models which, as mentioned above, were the same as the R192 but with a different name. These vehicles were classified as type code F2 by Midland Red and, like the type S25/F1 vehicles, were also fitted with Plaxton Derwent bodywork and B45F seating. The only differance in specification between these and the earlier types was a Ford four-speed synchromesh gearbox which was fitted to the F2 type.

The type F2 Fords did not last long in the Midland Red fleet. The first to be withdrawn was fleet number 163 in September 1979, and by the end of November of the same year all the remaining examples had been withdrawn, all with less than 7 years service.

In 1974, MROC acquired another twenty R1014 Fords, and like all the previous Fords ordered by Midland Red these were fitted with Plaxton Derwent bodywork and B45F seating. This was the final batch of Fords acquired by Midland Red and they entered service from April 1974, classified as Midland Red type code F3.

As with the type F1 Fords, MROC shortened a number type F3 Fords by cutting out a section of chassis and removing the rear overhang, with conversions starting in late 1979. The type F3 Fords that received this conversion were reclassified as type code M3, and are detailed on the “Ford R192 & R1014 — Miscellaneous Information” page.

Like the type F2, the type F3 Fords did not last long in the Midland Red fleet and with the exception of the M3 conversions, all had been disposed of before MROC split up on 6th September 1981. 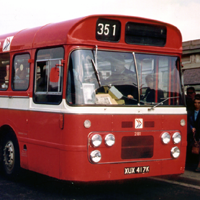 On 6th January 1974, BMMO took over the business of T.Hoggins & Sons of Wrockwardine Wood. Five vehicles were in the Hoggins fleet at the time, these being two Bedford coaches, two Ford coaches (registration numbers RTJ 364G and AAW 471K) and a Ford R192 bus (registration number XUX 417K) with B47F Plaxton Dewent bodywork. The four coaches were disposed of without being operated, but the two Ford coaches were loaned to City of Oxford Motor Services first.

Having a similar specification to the type F1 Fords already operated by the company, the R192 bus fitted in well with current operations and it was absorbed into the fleet. BMMO gave this vehicle the fleet number 2181, and she entered service with an engineering float allocation in February 1974. She was stored from March of that year, and during that time she received Midland Red style destination displays and was repainted standard “Poppy Red” livery. In September 1974, she re-entered service with MROC at Heath Hayes depot in Cannock, and later saw service at Kidderminster depot and Redditch depot before being withdrawn in December 1978.