At the formation of the company on the 6th September 1981, Midland Red (North) Limited inherited 121 Leyland Nationals from the Midland Red Omnibus Company Limited (MROC). These carried standard National Bus Company “Poppy Red” livery with a white band above the windows, which displayed the local MAP area brand name.

The management of the newly formed company believed the image of the old Midland Red had been tarnished in the eyes of the public during the late 1970s, and wished to create a new image for Midland Red North that distanced themselves as much as possible. The decision was taken to focus upon the local identities, which had been created in the area by Market Analysis Project (MAP) schemes between 1978 and 1980. Each brand name received its own colour coding, which replaced the white NBC band on buses, and the area brand name was shown on this in white. While the NBC “double–N” logo and poppy-red livery remained, the name “Midland Red” disappeared completely, except for legal lettering.

Colour coding for the local areas were: 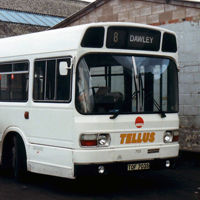 At the run up to privatisation in 1986, Midland Red (North) Limited wished to distance itself from the images of both the old Midland Red, and from the National Bus Company (NBC). After considering a number of new liveries proposed by various marketing consultancy, the company introduced an overall white livery with diagonal stripes of claret and yellow near the rear of the vehicle. Local area names from the Market Analysis Project (MAP) schemes were shown in large yellow and red lettering across the front and along the sides, with the letters “MRN” shown in a red disc.

This livery was phased out when Midland Red (North) Limited was privatised and sold to the Drawlane Group of Salisbury on Wednesday 27th January 1988.

Upon privatisation on 27th January 1988, the new owners of Midland Red (North) Limited, the Drawlane Group of Salisbury, immediately introduced a new livery in a style in-line with their group image. The MAP area names continued to be used, but were now much smaller and shown with equal prominence to the resurrected “Midland Red” name.

In the late 1980s, Mr Chris Hilditch was appointed as Managing Director for Midland Red (North) Limited, and he soon decided that he wanted two distinct identities to distinguish between bus and coach operations. At the time, Leyland National fleet number 766 (registration number BVP766V) was carrying the current bus livery but with the white body and yellow relief reversed, following a mistake at Carlyle Works when the vehicle was painted. The new Managing Director liked this erroneous livery and it was chosen to be the new company coach livery.

The local management at Tamworth depot argued that the yellow coach version of the livery should be applied to all their vehicles, as they operated important routes into Birmingham and they felt it was essential to have a recognisable eye catching colour scheme to distinguish themselves from the many other operators in the City. Head office at Cannock agreed and therefore all vehicles operating from Tamworth depot carried this yellow and red coach livery.

Note: Confusingly, all Midland Red North minibuses were initially all reprinted to coach livery, but later received the white and red bus livery.

In 1992, to commemorate the sixtieth anniversary of the opening of Wellington depot, Midland Red (North) Limited repainted Leyland Tiger fleet number 1705 (registration number A705HVT) into overall red BMMO livery, in the style used at the time of the depot opening in 1932 [ Photograph ]. This proved to be very popular with the public, and the company immediately decided to repaint one vehicle from each of their depots in to the same livery. Another Leyland Tiger, fleet number 1713, and a Leyland Olympian were chosen for Cannock depot and Tamworth depot. For Stafford depot, the vehicle chosen was Leyland National BVP769V, which had been new as fleet number 769, but recently renumbered to fleet number 969 when the roof-pod was removed for low-bridge work.

At the time, Mr Richard Bowler had recently taken control of the company as Managing Director, and he was keen revitalise the company image. He saw the overall red “Midland” livery as a way to rekindle some identification and enthusiasm with the “Midland Red” name, and he therefore ordered that the whole fleet to be repainted into this livery as soon as possible, and set a deadline of the end of 1994. In hindsight, this deadline proved to be a wee bit optimistic!

Midland Red (North) Limited renamed to Arriva Midlands North Limited on 6th November 1997. Soon after, a program started to repaint all vehicles in the fleet to standard Arriva corporate livery of turquoise and stone. 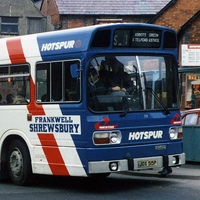 In November 1983, while in service at the Midland Red (North) Limited at Cannock depot, Leyland National fleet number 594 was repainted into overall white livery with red and blue joint advertising for Beacon Radio and Explorer Tickets. The Chaserider brand name was shown in blue above the windows, with the NBC “double-N” logo, but the claret Chaserider colour coding was not used.

Around the time of privatisation, the livery was reapplied without NBC markings, and the Explorer Tickets part of the advertising was removed in favour of larger advertising for Beacon Radio.

The overall advertising was removed in favour of Midland Red North white and red bus livery in June 1988. 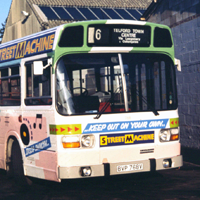 In June 1985, she received “Tellus Street Machine” livery, and the following month was re-seated to B41F and received fitted carpets. She also received a radio/cassette player, and the necessary speakers etc, at around the same time. In this form, she was displayed at a number of bus rally events by Wellington depot staff in 1985 and 1986.

In September 1987, the “Street Machine” livery was removed in favour of the standardised pre-privatisation bus livery.