Many of the 445 Leyland Nationals that were operated by MROC have been saved and are now preserved. 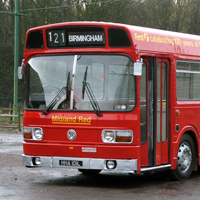 HHA101L was the first Leyland National operated by BMMO, being delivered in December 1972 carrying pre-NBC overall red BMMO livery with gold, underlined “Midland Red” lettering, and was the only Leyland National to carry this livery. She entered service as “unallocated” with the fleet number 101, and saw early work as a driver familiarisation vehicle, and service at Oldbury depot, Birmingham (Digbeth) depot and Dudley depot. She found a permanent home at Leicester (Southgates Street) depot, in April 1973, and the BMMO livery was removed in favour of overall advertising for “Ford & Slater.” By the mid-1970s, the sale of Birmingham depots to WMPTE had resulted in BMMO changing their name to Midland Red Omnibus Company Limited (MROC) and HHA101L became one of the first Leyland Nationals repainted in the new darker red standard NBC livery.

MROC was broken up into five smaller operating companies on 6th September 1981, and all the vehicles at Midland Red depots in Leicester, including 101, became part of the fleet for the newly formed Midland Red (East) Limited. Early in 1983, Midland Red (East) Limited changed their name to Midland Fox Limited and soon afterwards began renumbering all of the vehicles in their fleet; HHA101L received the new fleet number of 3101 at this time. She remained with Midland Fox until January 1985, when Midland Red (West) Limited acquired her, renumbered her back to the original fleet number of 101, and operated her mainly from their Hereford (Friars Street) depot, although she also saw service at Kidderminster depot, Redditch depot, and Worcester (Padmore Street) depot.

Shortly afterwards in April 1989, she began a new life as a driver-training vehicle for Midland Red West. She was renumbered to fleet number 2051 and received overall yellow training livery and dual control brakes with an extra centrally mounted “high chair” for the instructor [ Photograph ]. She was still fitted with many of her original fittings including the original large roof pod and separate smoking / non-smoking seating areas - complete with ashtrays! In May 2000, now working for First Midland Red Buses Limited, she was treated to a full body repaint in overall yellow livery, and withdrawn Leyland National fleet number 756 (AFJ756T) donated a replacement Leyland 510 engine in October 2002.

On the 13th March 2004, she was again renumbered, this time to fleet number 90270 to bring her in-line with the FirstGroup fleet numbering system, and in November of that year, she was repainted back to her original overall red BMMO livery with gold markings to commemorate the BMMO centenary. She continued to be used for driver training, and the odd bus rally, until summer 2007 when she was stored at Kidderminster depot with an oil leak. On 25th February 2008, after over 35 years, she finally ended her time with Midland Red as was passed to a preservation group. Restoration is now underway.

This vehicle was restored in NBC “Poppy Red” livery with “Severnlink” MAP area brand name and Midland Red fleet names, as the vehicle would have looked when it was operating from Worcester (Padmore Street) depot in the late 1970s. It was later converted to a mobile office with the seating removed, but the NBC livery remained unchanged.

By November 2006, the vehicle had disappeared and was believed to have been scrapped, but was then seen near Worcester behind a tow truck in early 2008. A few weeks later, in March 2008, she was discovered in the Martin Perry scrap yard in Bromyard. Parts from this vehicle have been used in the restoration of fleet number 101 (HHA101L), see above.

GOL403N was a type N3 Leyland National, new to Midland Red Omnibus Company Limited (MROC) in March 1975 at Tamworth (Aldergate) depot as fleet number 403. She remained at Tamworth throughout her service with Midland Red and passed to Midland Red (North) Limited with the operations of that depot when Midland Red split on 6th September 1981. Midland Red (North) Limited saw massive cutbacks at privatisation, and on 26th April 1987 withdrew 105 vehicles, including GOL403N. She was one of eight N3 Leyland Nationals passed to Northumbria Motor Services, Newcastle-on-Tyne at this time, and received the new fleet 714.

In November 1994, she passed to London & Country who sent her to East Lancashire Coachbuilders to be re-bodied with a “Greenway” conversion. She entered service as fleet number 376 at Guildford depot as part of the Guildford & West Surry fleet, with “Green Line” livery and route branding for service 415. She was re-registered to PDZ6276 in February 1995, and remained at Guildford until January 1998, when she moved to the main London & County fleet. With London & County now being part of the Arriva group, she was repainted into the turquoise and cream corporate livery and saw service a number of depots in the group before being withdrawn and sold to a dealer in January 2001.

After service with a number of operators, Paul Furse of Morden acquired her for preservation in July 2005. She has now been repainted to “Green Line” livery and is preserved as operated by Guildford & West Surry from around 1995. 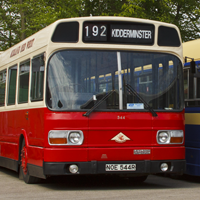 Fleet number 544 (registration number NOE544R) was new to Midland Red Omnibus Company Limited as type code N6 in September 1976, at Worcester (Padmore Street) depot. It operated at Worcester depot for its entire service life, passing to Midland Red (West) Limited with the operations of that depot on Sunday 6th September 1981, when Midland Red Omnibus Company closed. It was withdrawn from service at Worcester in December 1995, shortly after the introduction of new Dennis Lance buses, and was stored for over a year at Hereford (Friars Street) depot.

In February 1997, it passed to Birmingham and Midland Motor Omnibus Trust (“The Transport Museum”—BaMMOT), Wythall, for preservation, and over the following years has been fully restored in post-privatisation red and cream Midland Red West bus livery.

658 is one of four type N7 Leyland Nationals new to Evesham depot in the Autumn of 1977. Both 658 and her sister, 657, were still at that depot when Midland Red was broken up on 6th September 1981, and therefore passed to Midland Red (West) Limited. The two vehicles remained at Evesham throughout their service lives with Midland Red West, and were withdrawn in the late 1990s. In June 1999, First Midland Red reinstated 658 at Evesham depot and she saw another two years service before being withdrawn again on 30th November 2001, making her one of the last surviving Leyland Nationals in regular service with the company.

A vehicle shortage near the end of 2001 saw 658 pressed into service again on light duties at Evesham depot. At about this time, she was spotted working local services by a journalist for “Bus & Coach Preserved” magazine and was thrust into the limelight when they wrote a 6-page story about her in their February 2002 issue. Her third and final withdrawal came on 30th January 2002, and she moved to Redditch depot for storage. In July 2002, she was sold to David Peters of Birmingham for preservation, and moved to her new temporary home in Herefordshire. Since that time, she has found accommodation that is more suitable, and work has begun on a thorough restoration.

BVP 763V was a type N9 Leyland National, new to MROC at Cannock depot in September 1979. She passed to Midland Red (North) Limited at the formation of the company in September 1981, and remained in service with the company and several of their depots until 1998.