The Leyland National saw service with BMMO and its various descendant companies for over 30 years, but now they have all disappeared. Therefore, instead of listing vehicles in service, this page gives information on the last examples to survive with “Midland Red.”

For a full list of all Leyland National buses owned or operated by BMMO and all the Midland “Red” offspring compinies, see the “History and Allocations” pages in the links below.

The last two Leyland Nationals in service with Arriva Midlands North Limited (previously named Midland Red North Ltd) were withdrawn in 2002, and are both now used for driver training. These are… 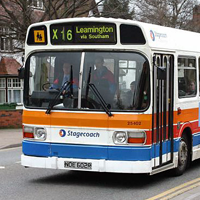 The Mark II Leyland National was never popular in the Midland Red West fleet; however, it did outlive the Mark I with two examples surviving until May 2002.