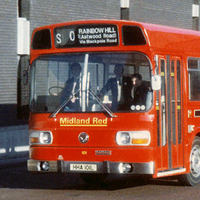 The first Leyland National to be delivered to Birmingham and Midland Motor Omnibus Company Limited (BMMO—Midland “Red” Motor Services) was fleet number 101 (registration number HHA101L). This was new in overall red BMMO livery with gold lettering, and was the only Leyland National to carry this livery as all subsiquent examples were delivered in NBC “Poppy Red” livery. This livery was quite short lived and 101 was later repainted with overall advertising for Ford & Slater.

101 was repainted back to this original overall red BMMO livery by First Midland Red to celebrate the Midland Red Centenary in November 2004. 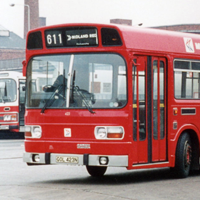 In 1972, National Bus Company (NBC) announced that they had decided to emphasise its national identity. To achieve this, the NBC “double-N” logo was introduced, and liveries were standardised across all the companies in the group. All coaches in the group were repainted to overall white and carried the “National” fleetname in large lettering with the local company name shown in small lettering. Buses and other vehicles kept their existing livery colour, which for BMMO was overall red, and the company name and NBC logo was shown in a standardised style on the sides.

The NBC livery used by Midland Red for their buses was known as “Poppy Red”, and repainting of all buses in the fleet started in August 1972. All Leyland National buses, except fleet number 101 (see above), were delivered new in Poppy Red livery.

This livery was modified slightly in the mid-1970s with the addition of a white stripe along the side of the vehicle, below the window line, and again with the introduction of MAP area branding from around 1976 (see below).

It is not intended for this website to chart the history of the West Midlands PTE (WMPTE), however a small part of that companies history has been included on this page to illustrate how it affected the history of Birmingham and Midland Motor Omnibus Company Limited (BMMO—Midland “Red” Motor Services).

In March 1976, as part of a trial scheme before the introduction of Midland Red’s Viable Network Project (VNP), fifteen Leyland National buses allocated to Redditch depot received “Reddibus” branding. The name appeared in large letters along the sides of the buses, below the windows.

See the “Market Analysis Projects (MAP)” page in the History section for more details of the Reddibus brand name.

In 1977, the National Bus Company (NBC) started a series of Market Analysis Project (MAP) route surveys that saw the introduction of local area identity brand names which, with the exception of “Reddibus” (see above), was displayed on “Poppy Red” vehicles painted in a thick white band above the windows. 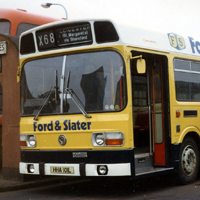 HHA101L was the first Leyland National operated by Birmingham and Midland Motor Omnibus Company Limited (BMMO—Midland “Red” Motor Services), being delivered in December 1972. The vehicle entered service as “unallocated” in pre-NBC BMMO livery of bright red with gold lettering, becoming the only Leyland National to carry this livery.

After being given a permanent depot allocation at Leicester (Southgates Street) depot, in April 1973, the BMMO livery was removed in favour of a yellow, white and dark blue livery with overall advertising for Ford & Slater (Leyland Truck Sales & Service) of Leicester. HHA101L later became one of the first Leyland Nationals to be repainted in the new darker red NBC livery before becoming part of the Midland Red (East) Limited fleet when Midland Red was split up on 6th September 1981.

HHA101L survived with various “Midland Red” companies for over 35 years, and is now restored in its original red BMMO livery. See the “Leyland National — Preserved” page for more information about this vehicle. 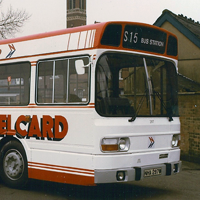 In January 1981, NHA297M was repainted into overall advertising for Hotsput Shrewsbury Travelcards while in service at Shrewsbury depot. The advertising was only as high at the window tops, and the standard NBC white band on a “Poppy Red” background remained above the windows. Considering the product being advertised, it was only natural that “Hotspur” MAP area branding was carried on this vehicle in its normal place in the white band.