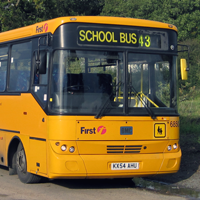 In November 1990, Birmingham (Digbeth) depot received number Peugeot-Talbot Pullman minibus. These buses were very distinct as they had a twin axle at the rear and were painted in a green and yellow Cenro “Quickstep” livery. They were leased to Midland Red West Limited for three years from the manufacture with Centro paying the bills. At the end of the contract Midland Red West Limited bought the vehicles and most later found their way to Kidderminster depot. By the end of their service most had been repainted in red and cream Midland Red West bus livery.

All were withdrawn by July 1996 and placed into storage. When the new Mercedes-Benz O.814 Vario fleet arrived at Worcester (Padmore Street) depot in 1998, the Peugeot-Talbots were either scrapped or sold. 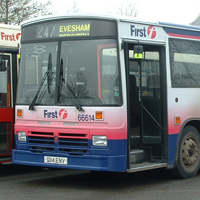 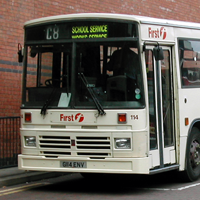 On Friday 8th August 2003, First Midland Red Buses Limited acquired two Volvo Citybus B10M-55 coaches from First Northampton. These vehicles were originally intended to be used at Evesham depot on school contracts that were due to start when the schools reopened in September. However, as Worcester (Padmore Street) depot already operated a Volvo B10M double-decker, First Midland Red decided to keep all their Volvos together at one depot and these two vehicles entered service at Worcester depot, with Leyland Tiger 1005 (registration number B105JAB) being re-allocated to Evesham depot at this time to operate the extra school services.

112 (registration number G112ENV) had DP53F Duple 300 bodywork, while 114 (registration number G114ENV) was simular but had DP51F layout, having had two seats removed from the near-side at the front and a luggage pen fitted. Both vehicles entered service by the end of August 2003, still in First Northampton livery and with their original First Northampton fleet numbers.

114 (registration number G114ENV) was taken off the road at the end of November 2003. It recieved a full body overhaul at the body shop at Worcester (Padmore Street) depot and was then repainted into FirstGroup “Barbie2” livery by an outside contractor, returning to Worcester depot on 3rd December 2003, to be fitted with the pink fade.

Shortly after 114 was repainted a third example, 113 (registration number G113ENV), was delivered and entered service at Worcester depot on 22nd December 2003. This vehicle is also DP51F, having had two seats removed to make room for a luggage pen. With the introduction of the new First Group numbereing system on 13th March 2004, these vehicles renumbered to 66112–66114.

A forth example, fleet number 66611 (registration number E111NNV), operated at Evesham depot on loan from First Leicester for a few weeks in September 2004 while 66613 was a Leicester with mechanical problems. 66611 later returned to Leicester and has since been destroyed by fire.

With the pending closure of Evesham depot, the three examples still in use at that depot (fleet numbers 66612–66614) were withdrawn in April 2006 and stored. 66612 and 66614 passed to James (dealer) of Tamworth in July 2007, and found later use, while 66613 remained stored at Redditch depot as derelict, and was eventually scrapped.

From September 2002, First Midland Red had planned to operating a small number of Volvo double-decker buses from their Redditch depot. Three or four of these vehicles were to be used on loan from First Northampton for use on the A1 & A2 Alcester Grammar School services, and in early August of that year the first of these vehicles, fleet number: 123 (registration number K123URP), arrived at Redditch depot. 123 was a DPH47/35F Alexander RV bodied Volvo B10M-50 in full FirstGroup “Barbie2” livery and it was used at Redditch throughout August for driver training.

In early October 2002, First Midland Red were being criticised in the local press over problems with overloading on certain school services operated from their Worcester depot. On the 10th October, another Volvo B10M-50 arrived from Northampton, this vehicle was fleet number: 283 (registration number F83XBD), in the First Northampton fleet and was initally stored at Worcester depot. It entered service at Worcester after the half-term school holidays on Monday 4th November 2002, keeping its First Northampton fleet number of 283.

F83XBD was withdrawn during the half term school holidays at the start of June 2004, and replaced with Leyland Olympian, fleet number 31379.

In November 2005, K123URP, renumbered to 38123 by this time, returned to First Midland Red for use at Kidderminster depot on schools services. She was joined at thet depot in January 2006 by 38124 (K124URP). Shortly before the start of the Easter school holidays, 38123 was taken to the body shop at Worcester depot to be repainted to the new green and red “Greenbus” livery, with 38124 following a week later. During the school summer holidays in 2008, both 38123 and 38124 returned to the body shop at Worcester depot and had their Greenbus livery removed and returned to standard corporate livery.

In 1983 Midland Red (West) Limited acquired two Bedford YMT coaches with Duple C53F bodies from GH Yeomans of Hereford. They were given the fleet numbers 845 and 846 in the Midland Red West fleet, and operated at Hereford (Friars Street) depot in full Yeomans livery, with Midland Red West legal lettering and fleet numbers, on a former Yeomans service between Hereford and Credenhill.

In May 1984 the one-man operation equipment was removed from both vehicles and they were repainted into overall white coach livery with red and blue NBC stripes.

845 was withdrawn in July 1987, with accident damage and, with only one vehicle of the type now left in service, Midland Red West withdrew 846 two months later in September. Both vehicles were kept in storage at Worcester (Padmore Street) depot for about a year before passing to Wacton (dealer) in Bromyard. 845 was scrapped, while 846 was passed on to an operator in Cheltenham.