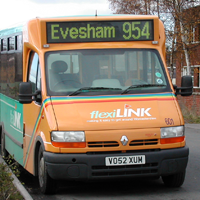 On the 11th September 2003, First Midland Red took delivery of two Renault Master minibuses with B15F bodywork by Rohill. These vehicles had been purchased new by the Passenger Fleet Transport Unit of Worcestershire County Council using money from a successful Rural Bus Challenge bid, and were to be operated on their behalf by First Midland Red. Initially they were stored at Worcester (Padmore Street) depot while they were made ready for service, before moving to Evesham depot on Monday 15th September for driver training.

Both vehicles carried County Council flexiLINK livery of orange and green for use on Vale flexiLINK services between Evesham and Pebworth (service numbers 954 and 955) that commence from Evesham depot on Thursday 18th September 2003. The vehicles were fitted with full width digital destination displays, Mobisoft MobiRouter vehicle dispatch systems, wheelchair ramp with space for one wheelchair and a stereo radio cassette player!

Although Evesham depot operated a few Mercedes-Benz O.814 Vario minibuses on loan from Worcester depot for short periods from September 2001, these were the first minibuses permanently allocated to that depot. Also, as they had 5-speed manual gearboxes they were the first vehicles operated from Evesham depot with a clutch pedal since Shortened Ford R1014 number 371 (registration number PHA371M) was loaned to Midland Red (West) Limited at that depot in from February 1982 to December 1983, unless anyone knows better…

Both vehicles suffered from reliability problems and 54093 (registration number VN52KXM) returned to Worcestershire County Council in November 2005, being replaced by a Mercedes-Benz O.814 Vario minibus. The County Council withdrew their flexiLINK services in the Evesham area on 26th February 2006, with the remaining vehicle returning to the County Council two weeks later.