The Leyland Lynx replaced the Leyland National as Leyland’s standard single-deck bus in 1985, and remained in production until 1992.

The first Leyland Lynx to be operated by Midland Red West Limited was a B51F demonstration vehicle, registration number C920FMP, which arrived at Redditch depot on 4th April 1987. Fitted with a Leyland engine and Hydrocyclic gearbox, this vehicle was licensed to Leyland Buses but did not have any legal lettering, fleet numbers, names or other markings. It was used at Redditch depot from 23rd April until 2nd May 1987, mainly on Sirvice 318, which then ran from Redditch, Alexandra Hospital to Stourbridge via Bromsgrove, and the X8 which ran from the Alexandra Hospital into Birmingham via Wythall. It was also used on Services 57 ans 58 in Redditch. 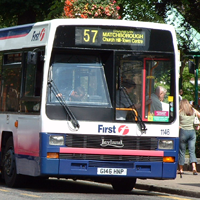 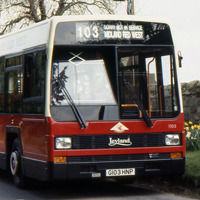 Midland Red West’s first fifty Leyland Lynx buses, fleet numbers 1101–1150, were put in service at Birmingham (Digbeth) depot on Sunday 1st April 1990, replacing all the Leyland National buses that were at that depot until that time, although fleet numbers 1101 and 1102 had been used from February 1990 for driver training. Midland Red West held a press launch at Hams Hall Power Station to mark the occasion, with the Power Station later being used to store the withdrawn Nationals before they were disposed of.

Evesham depot operated Leyland Lynx buses for several years alongside their Leyland Nationals, however these were always on loan from Redditch depot. In late 2001 and early 2002 driver shortages at Redditch and Worcester resulted in Evesham depot being allocated more work from those depots and, with the withdrawal the last of the Leyland Nationals, Evesham finally received their own allocation of ten Leyland Lynx buses, fleet numbers 1141–1150, followed by an additional two, fleet numbers 1139 and 1140 in the spring of 2002.

Until late 2003, neither Hereford nore Worcester depot had been allocated any Leyland Lynx buses, except for a small number of Kidderminster Lynxs that found their way to Hereford for short periods. However, in October 2003, services at Redditch depot were cut and serveral vehicles became surplus to requirment at that depot, with some finding their way to Hereford depot. A number of examples were withdrawn at that time, with some being loaned or sold to other companys within the group, with many examples finding use as driver training vehicles.

In December 2004, First Midland Red started to take delivery of a batch of 21 Alexander Dennis Enviro300 single-deck buses for Redditch depot and Evesham depot. As these new vehicles entered into service, the Leyland Lynxs were withdrawn and passed to First Leicester, either for service or simply for storage. On 30th June 2005 the first of these, 62739, was taken from its storage in Leicester to be scrapped. By the end of 2005, all of the Leyland Lynxs operated by the company had been withdrawn, except for 62714 which survived as a driver training vehicle. Many of the vehicles stored at First Leicester later passed to FirstGroup Central Engineering at Rotherham and were converted for driver training services. 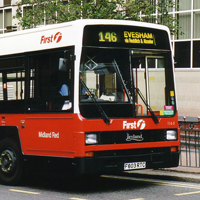 Near the end of May 2000, First Midland Red acquired three Leyland Lynxs from her sister company First Bristol (Cityline). These were F601–F063RTC and were allocated the new fleet numbers 1161–1163 by First Midland Red. Externally they are slightly different from the Lynxs that were new to Midland Red West in 1990 as they are fitted with digital destination numbers at the front, side and rear.

Due to a general vehicle shortage, 1161 and 1162 were put into service immediately still carrying Cityline livery, while 1163 spend about two weeks at Worcester in the body shop before leaving to be repainted on the 25th June 2000. Number 1161 went for repaint around the 14th July, and 1162 was taken off the road on the 21st to be stripped down for its repaint, returning in its new paint on the 7th August 2000.

For the first few months these vehicles were moved between Redditch and Evesham depots but in November 2000, all three received “CircleLine” branded marking for use on the 57 & 58 Redditch town services and were permanently allocated to Redditch depot.

All three of these vehicles were withdrawn from service by First Midland Red in August and September 2002, ready to be returned to First Bristol. Before being returned they were repainted in to FirstGroup “Barbie2” livery and had the plastic side mouldings removed which had become common practice at First Bristol with Leyland Lynxs. However, First Bristol later decided they didn’t require these vehicles so they were reinstated with First Midland Red at Redditch depot. In November 2003, all three of these vehicles were passed to First Leicester for use on their Service 25, and carried Pink route branding for that service.

Vehicles on Loan from First Bristol

Following a higher than normal amount of vehicle accidents at Redditch depot during the summer of 2001, First Midland Red did not have enough vehicles available to cover all of their services when the schools returned from the summer break in September. To make up for the temporary shortfall three Leyland Lynxs, registration numbers F609RTC, F612RTC and H660YHT, were borrowed from First Bristol, arriving at Worcester depot on 5th September 2001.

F609RTC and F612RTC were put into service at Evesham depot running with First Midland Red fleet numbers 1169 and 1172, and were returned to Bristol (Badgerline) on 28th September and 1st October 2001.

H660YHT was allocated at Kidderminster depot with the First Midland Red fleet number 1160, and used on the N.E.W. College contract service C31. It was returned to First Bristol (Cityline) on the 27th September 2001.

None of the three First Bristol Lynxes could operate from Redditch depot as they were not fitted with anti-attack screens for drivers, and Union agreements at Redditch required all vehicles operated from that depot to be fitted with such screens.

Thanks to Guy Craddock for supplying much of the information on this page.