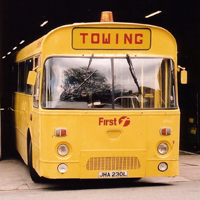 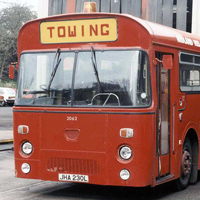 When Midland Red (West) Limited formed on 6th September 1981, the company inherited two towing vehicles from Midland Red Omnibus Company Limited (MROC), both of these being converted Leyland Leopards. These two vehicles were fleet number 2060, formally a type LC9 Plaxton coach, which was based at Worcester (Padmore Street) depot, and fleet number 5242, formally a type LS18 Willowbrook bus, based at Bromsgrove depot. Both operated with trade number plates.

On closure of Bromsgrove depot in September 1983, number 5242 moved to Redditch depot, however it only saw a few years service there before it was withdrawn with severe rear end chassis rot. This left the Redditch and Kidderminster area without a towing vehicle and Midland Red West were regularly hiring a commercial companies to rescue their ageing fleet of Leyland Nationals. (From 23rd December 1986, Midland Red West also operated an AEC Matador at Birmingham (Digbeth) depot. This vehicle had originally been acquired by BMMO from the Ministry of Supply in 1947 and passed to Midland Red Express on 6th September 1981).

To save money Midland Red West decided to convert Leyland Leopard fleet number 230 (registration number JHA230L), a type S27 with DP49F Marshall bodywork, into a towing vehicle for use at Redditch depot, and over a number of months work was carried out between other jobs. This included the removal of the rear body section behind the rear axle and the installation of towing equipment and concrete ballast weights salvaged from 5242. The conversion was not without problems as at one point the vehicle ended up in an inspection pit in the Church Road garage at Redditch after a mechanic moved it not knowing the brakes didn't work properly. When work was complete it was brush painted in an all over red livery.

As the vehicle has been converted it had to be sent to the Testing Centre at Kidderminster to be reclassified. Unfortunately JHA230L was classed as an HGV in error and the mechanic who had driven it to the test centre could not take it back to Redditch because he didn’t have the necessary driving licence entitlement. Subsequently JHA230L was reclassified as a heavy car, having less that 8 seats, so it could be driven by all the staff. JHA230L finally re-entered service at Redditch depot as a towing vehicle with the fleet number 2062 in May 1989, keeping its original registration number of  JHA230L.

2062 was repainted into an all over yellow livery in the mid 1990s and remained in service at Redditch depot until March 2003, when the engineering department at there started to wind down its operations before closing down. 2062 was moved to Worcester depot at that time for storage but continued to see occasional service as a second tow and crew vehicle at Worcester alongside 2064 (registration number NOE614R). She was granted a reprieve later that year and returned to Redditch depot to continued service as towing vehicle.

On 17th March 2004, she was at Worcester depot for a service and MOT when a fire broke out in the engineering section of the building. At the time, JHA230L was parked near to the seat of the fire and suffered very heavy damage, with the bodywork being almost totally destroyed. For almost two months her remains were left in the burnt out building before she was finally taken for scrap on Friday 14th May 2004.

By July 1984, it had been re-bodied by Plaxton with a C44Ft Paramount 3200 body following a major accident in October 1982, and had been modified to take a TL11 218hp Leyland Tiger engine. It re-entered service with Midland Red (Express) Limited in National Holidays livery with the registration number Q553UOC and fleet number 553.

While still in service with Midland Red (Express) Limited it was re-seated to C42Ft some time around September 1984, then repainted into National Express “Rapide” livery in June 1985.

While operating with Midland Red West Limited, 1053 was re-seated to C34Ft+Tables in February 1988, then in June 1989 the “Rapide” livery was replaced with overall red Midland Red West coach livery with “Midland Red Coaches” branding. Some time around 1993, the vehicle was downgraded for bus work, being re-seated to C49F, fitted for one-man operation, repainted into Midland Red West bus livery of red and cream, and renumbered to fleet number 853.

Q553UOC was withdrawn from service with First Midland Red Buses Limited at Hereford (Friars Street) depot in September 2000 after a head-on collision with a car near Hereford but was later rebuilt (again!) using parts from the withdrawn Leyland Leopard number 854 (see below) and re-entered service at as “Unallocated” on 19th February 2002. It remained in service, mostly at Hereford depot until June 2003 when it was withdrawn and stored at Redditch depot before passing to a dealer for posible future use. 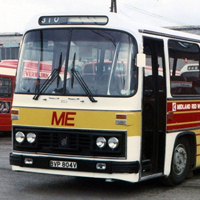 This vehicle entered into service with Midland Red Omnibus Company Limited (MROC) at Hereford depot in August 1980, with a C53F Willowbrook 003 Express body carrying National Bus Company (NBC) “Dual Purpose” livery of red and white, running with the fleet number 804 and registration number BVP804V. When MROC split up on 6th September 1981, it passed to Midland Red (West) Limited at their Worcester depot. In May 1983, it was repainted in white, yellow and red NBC “Midland Express” livery for the new Limited Stop “X” services.

She re-entered into service in overall white livery with red and blue stripes, which was subsequently fitted with National Express logos. She was painted in “MidWest” livery in December 1985, to “National Holidays” in April 1987, and overall red Midland Red West coach livery with “Midland Red Coaches” branding in June 1990. When she was fitted for one-man operation in the mid 1990s its fleet number was changed to 854 and it was again repainted, this time to the standard Midland Red West bus livery of red and cream.

In December 2000, while operating a Service 374 from Tewkesbury to Worcester, 854 became stuck in floodwater near Upton-upon-Severn. She remained stranded there for over a week as the tow truck was unable to reach her, and during that time the water depth rose to around 5'. After the vehicle was recovered, it was withdrawn from service due to the damage the water had caused and stripped for spares before being passed to Wacton (dealers) of Bromyard for scrap in December 2001.

Midland Red West later used the A31YWP registration mark on a Bedford pick up truck at Redditch. This truck was transferred to Digbeth in 1988 but written off in an accident soon after.