Midland Red (Express) Limited formed on Sunday 6th September 1981, taking over long distance coach work from the Midland Red Omnibus Company Limited (MROC). Initially this was the only type of work undertaken by the company and as a result, the entire fleet was made up of coaches. 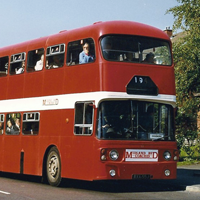 All were acquired by Midland Red Coaches Limited via dealer Martin’s of Middlewich for use on a short-term West Midlands PTE contract, and only saw four months service before being replaced by five Leyland National sigle-deck buses that were on-loan from Midland Red (West) Limited, Worcester. All five Daimlers then passed to Ribble Motor Services Limited, Preston.

These five vehicles were the only Daimler Fleetline double-deck buses to be operated by the company.