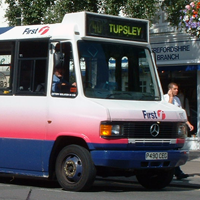 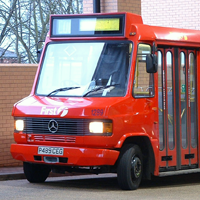 On 28th January 2003, three Mercedes-Benz 811D minibuses with Marshall bodywork, registration numbers N523REW and P489–P490CEG, arrived at the First Midland Red depot in Worcester from First Leicester. Initially it was believed these vehicles were at Worcester to be serviced and put through and MOT before returning to Leicester, and after being stored for a few days they were moved indoors for work to begin.

However on the 3rd March 2003, one of these vehicles, P489CEG entered service with First Midland Red at Redditch depot retaining its London red livery and First Leicester fleet number of 729. The vehicle saw use mainly on the local service 68A and service 70 on the Redditch Overground routes, and carried a temporary destination display made from a sheet of A4 paper! Shortly after 729 entered service it was renumbered to fleet number 1289 to bring it inline with the First Midland Red system of fleet numbers.

N523REW was taken to receive a new gearbox on 20th March 2003, as the reverse gear was missing, and P490CEG has also experienced a number of serious gearbox problems. By 28th March, both vehicles had been repaired and renumbered by First Midland Red to fleet numbers 1283 (registration number N523REW) and 1290 (registration number P490CEG), with 1290 having its “Barbie2” fade fitted at that time.

An additional two Mercedes-Benz 811D were passed to First Midland Red in the following months. These were fleet number 1285 (registration number N525REW) which was passed on to First Glasgow without seeing use with First Midland Red, and fleet number 1286 (registration number N526REW) which replaced 1289 at Redditch depot in June 2003, when that vehicle was withdrawn with mechanical failure. 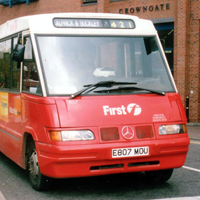 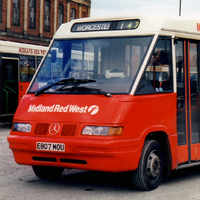 Midland Red West Limited acquired E807MOU in February 1997 for use on the Service C10 School contract operated from Worcester (Padmore Street) depot. Until this time one of the 49-seat Leyland Leopard coaches, either fleet number 853 or 854, had been used but flowing a number of minor accidents in the narrow lanes around Alfrick the company decided a smaller vehicle was required. The contract required a vehicle with seatbelts and a minimum capacity of 28 but at the time Midland Red West did not have any suitable vehicles.

E807MOU carried B29F Optare StarRider bodywork and was part of a twenty-four vehicle batch, new to Badgerline Limited in 1988. It later passed to Western National, Truro, where it had carried the fleet number 827, before passing to First Midland Red in February 1997. The engine needed to be replaced before the vehicle could enter service as original unit had expired during the long journey from Cornwall to Worcester. The required seatbelts were also fitted at the same time and 807 finally entered service, still in Western National livery, about a month behind schedule.

It was unpopular with drivers at Worcester because of its terrible reliability and extremely soft suspension that made one feel seasick. When the main fleet of Mercedes-Benz L608D minibuses were replaced with Mercedes-Benz O.814 Vario minibuses in August 1998, the popularity of 807 further diminished as it was left as the only vehicle operated at Worcester with a manual gearbox.

Although 807 was acquired for the C10 schools contract, it was also used on a number of other services such as Service 147 between Worcester and Redditch, and the lunchtime service 312 and 313 from Worcester to Clifton-Upon-Teme. First Midland Red later withdrew all of these services, and 807 found work on the C8 Droitwich High School contract. In 1998, she appeared on the front cover of a Worcester area timetable shown operating a local Worcester service 23, however although 807 was occasionally used on local city services this was very rare as minibus drivers were not permitted to drive vehicles with more than 22 seats.

In July 2002, she moved to Hereford (Friars Street) depot but only saw about four weeks service there before final withdrawal. After withdrawal, she was stored at Hereford depot and later Kidderminster depot before being sold to Erith Commercials at the end of 2003. It passed to Eurobuses of Stoke-on-Trent in overall white livery, and it’s believed it later saw service with Browns Coaches of Congleton.