Fleet number 1406 (registration number E406HAB) was new to Redditch depot in October 1987, entering service on Wednesday 11th November 1987 in yellow, orange and red “ReddiLink” livery. This livery was the branding for the local minibus services operating in Redditch town at the time and was used on the fleet of Mercedes-Benz L608D minibuses that were operated at Redditch depot.

Fleet numbert 1406 was the only Mercedes-Benz 609D to carry this livery.

On the 24th October 1987, the Wyre Forest Shuttle services expanded to include Bewdley. Five Mercedes-Benz 609D minibuses (fleet numbers 1407–1411, registration numbers E407–E411HAB), entered service at Kidderminster depot to meet the extra demand. These five vehicles entered service in yellow, orange and green “Wyre Forest Shuttle” livery, the same as that carried by the Mercedes-Benz L608D vehicles, except the words “Wyre Forest” no longer appeared on the sides.

Midland Red West phased out the Shuttle livery in favour of the red and cream Midland Red West bus livery, with “Shuttle” branding, with the first repaints in January 1991. 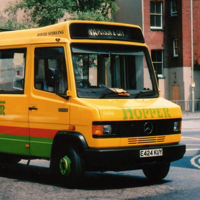 Vehicles that were new to Hereford depot on Saturday 23rd April 1988 (fleet numbers 1412–1437) carried Yellow, Green and Orange “Hereford Hopper” livery which was the brand name for the local minibus services introduced at that time. Most of these vehicles were also named, with the name being shown above the doors in black.

From April 1991, a number of Mercedes-Benz 609D minibuses were moved from Hereford depot to Digbeth depot. Initially these operated from Digbeth in Hereford Hopper livery, but with the brand names removed and a Midland Red West “Wyvern” logo fitted to the bonnet. These vehicles were soon repainted to red and cream bus livery.

For more information on the naming of the Hereford Hopper minibuses, see the “Mercedes-Benz 609D - Miscellaneous” page.

By the end of 1994, all the Mercedes-Benz 609D minibuses (except vehicles with overall advertising) carried the standard Midland Red West livery of a red body with cream roof and window frames. These vehicles later had their original Midland Red West markings and logos replaced when Midland Red West adopted the trading name First Midland Red in April 1998.

The Frank Guy bodied Mercedes-Benz 609D minibuses that were bought second hand from First Eastern Counties and painted before April 2001 feature a slightly different livery. On these vehicles the division between the red lower section and the cream top is much lower, level with the headlights. None of the older Reeves Burgess Mercedes 609D buses from 1987 and 1988 carried this new style livery.

In April 2001, FirstGroup announced a new livery for all “older” vehicles within the group. At the time First Midland Red were in the process of repainting their ex-First Eastern Counties, Frank Guy bodied Mercedes 609D minibuses into the newly revised red & cream First Midland Red livery. This practise was immediately stopped and all vehicles painted after this time received the new “Barbie2” FirstGroup livery. However, due to a shortage of the pink fade vinyl that is used with the Barbie2 livery an interim livery was created by painting a solid pink stripe were the fade should be fitted.

By the autumn of 2001 the pink fade vinyl had become widely available and so First Midland Red started to upgrade their vehicles to the full “Barbie2” livery.

1435 was new to Midland Red West at Hereford (Friars Street) depot in the standard yellow, green and orange Hereford Hopper livery. In the early 1990s, it recieved full body advertising for “Fersina Glass”, then in October 1995, it was reallocated to Kidderminster depot where it received full body advertising for “Walkers Timber”. In September 2000, it was repainted into Midland Red West livery with FirstGroup markings.

1436 operated from Hereford depot from new and carried full body advertising for “Bartonsham Farm Dairies” from January 1991 until it was withdrawn.

1437 which had also been allocated to Hereford depot from new. This vehicle carried full body advertising for “Wyvern Flooring” from November 1990 until sometime around 1993, when it was repainted to standard Midland Red West livery of Red and Cream. 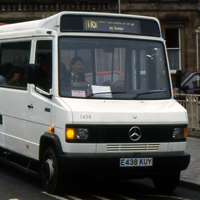 1438 was allocated to Hereford depot from 1988 and carried full body advertising for “Radio Wyvern” from October of that year. It repainted into standard Midland Red West of Red and Cream in August 1990 and remained in that livery until it was withdrawn from service in August 2002.

1439 was allocated to Hereford depot from August 1988 and carried full body advertising for “Astraglaze” Double Glazing from that time. It repainted with all over advertising for “Safeway” in July 1990, which in turn was replaced with standard Midland Red West bus livery of Red & Cream sometime around 1993. This vehicle was withdrawn from service at Hereford depot in October 2001.

1624, which was operated by First Midland Red from Hereford depot between March 2001 and December 2002, received advertising for “Herefordshire Training Group” in when it first entered service. This ex-First Eastern Counties Mercedes 609D only had advertising from the passenger doors aft with normal red & cream livery at the front, thus it looked like a normal First Midland Red bus as it approached bus stops.

1651 was allocated to Hereford depot between August 2000 and January 2003 and featured advertising for “South Hereford Garage” throughout its service with First Midland Red Buses Limited. Like 1624, this ex-First Eastern Counties Mercedes 609D only had advertising from the doors aft. Also the telephone number quoted in the advert was incorrect!

1607 and 1654, which were both allocated to Hereford depot, carried a full height rear advert, on behalf of Herefordshire Council and Travelwise, to promote cycling.

1661, which was also allocated to Hereford depot, carried a full height rear advert, on behalf of Herefordshire Council and Travelwise, to promote bus travel. The advert featured a photograph of a First Midland Red Dennis Dart and the slogan “It's time to get the bus.”