First Midland Red started to withdraw examples of their Mercedes-Benz O.814 Vario minibus fleet in February 2004, after a change in senior management saw a policy shift away from minibus use. These vehicles were only just over 5-years old at the time and therefore still in good condition, so unlike the previous generation of minibuses, almost all found further use with other operators. Two of these have now found their way into the hands of preservation groups, and with several examples still in service with various operators more may follow. 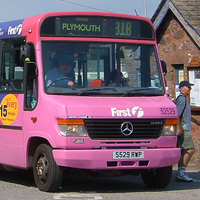 Fleet number 529 (registration number S529 RWP) spent its entire service life with First Midland Red at Worcester (Padmore Street) depot, and while there it received FirstGroup “Barbie2” livery, a full-height rear advert for “Two Seasons” Holidays, Worcester, and later yellow route branding for Worcester OverGround service 35. Of more interest, it was also fitted with an experimental satellite tracking system that was tested by the company but never adopted and later abandoned.

She was withdrawn from service in January 2005, having been renumbered to fleet number 52529 as part of the First Group national fleet numbering system the previous year, and immediately passed to First Devon and Cornwall at their Torpoint depot.

Before entering service, 52529 was reseated to B27F and repainted into a very sticking livery of pink, blue and purple for “Tamar Link” ferry services. After almost five years of service she was withdrawn and in September 2009 she passed to Cornwall Bus Preservation Group.

Photographs show the vehicle while still in service with First Devon & Cornwall. Preserved photographs are not available at time of writing. 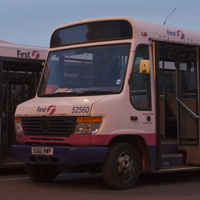 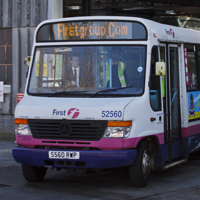 Fleet number 560 was one of three vehicles in the batch of sixty-four that was fitted with a tachograph and first-aid kit from new, for use on private hire work (the other two vehicles being fleet numbers 558 and 559). Because of this she had an early introduction to the bus enthusiasts scene when she attended ShowBus 1998 at I.W.M. Duxford, when only seven weeks old.

Other than a brief spell on loan to First Essex Buses in early 2003, she had a uneventful life at Worcester (Padmore Street) depot and somehow managed to escape the company repaint program, remaining in original red and cream livery. By March 2006 however, she had become the last remaining vehicle of the type left in service at Worcester depot, but the push towards larger low-floor Dennis Dart and Optare Solo buses saw the class finally disappear from the streets of Worcester when she was moved to Kidderminster depot in September 2006.

After about six months in service at Kidderminster she was withdrawn on 18th April 2007, and passed to First Hampshire & Dorset on the 28th of that month. She was repainted to FirstGroup “Barbie3” livery and entered service at Hilsea depot where she remained for seven years, having the original destination equipment replaced by a full-width LED destination display while there.

With the Disability Discrimination Act 1995 requiring all buses up to 7½-tonne to be fully accessible for wheelchair users from 1st January 2015, this type of vehicle was no longer legal for use on stage carriage bus services from that date and therefore it was withdrawn by First Hampshire & Dorset on 27th December 2014, although it hadn’t been used in service for about a week before that date. Jamie Brazier, a bus enthusiast from Worcester, offered to buy the vehicle and collected it from storage at Hoeford depot near Gosport on Wednesday 18th February 2015.

On 12th April 2015, the bus passed to the newly formed Wyvern Bus Preservation Group, of which Jamie Brazier is a member. It is the intention of the group to return the bus to original red and cream Midland Red West livery, as operated from new at Worcester depot.