Red and Cream with Black Stripes

All Mercedes-Benz O.814 Vario minibuses operated by Midland Red West Limited, later First Midland Red Buses Limited, entered service in a new variation of the companies established red and cream bus livery. The dividing line between the lower red section and the upper cream section was much lower than previously used and sloped upward behind the rear axle, with two black dividing lines.

As Midland Red West was now part of FirstGroup the traditional “Wyvern” logo was no longer used, and the “First” name and logo was shown on the front, rear and sides above the windows. The “Midland Red” fleet name was used on the sides below the windows, but this was later removed.

In April 2001, FirstGroup announced a new livery for all older vehicles within the group and vehicles repainted after that time all received the this livery.

Certain Mercedes-Benz O.814 Vario minibuses that carried the FirstGroup “Barbie2” livery were also fitted with Route Branding for use on the Worcester City “OverGround” services.

Red and Cream with Purple branding

In 1999, First Midland Red Buses Limited operated limited stop Service X31 during off-peak hours between Worcester City Centre and the two branches of the Worcester Royal Infirmary at Ronkswood and Newtown. Two Mercedes-Benz O.814 Vario minibuses were fitted with purple and pink “Hospital Trust” branding for the Worcester Royal Infirmary and were scheduled to include the Service X31 in their working, although they were also operated normally on other Worcester City services.

The Service X31 was quite short lived and was withdrawn on 28th May 2000, being replaced four months later when the Service 303 from Kidderminster was re-routed and extended to service all three branches of the Worcester Royal Infirmary. Both of the Mercedes minibuses continued to carry the purple and pink branding for a further year, returning to standard red and cream livery in May 2001.

On 5th July 2004, First Midland Red Buses Limited launch their “OverGround” service branding in Worcester City, which involved several Mercedes O.814 Vario minibuses being fitted with colour-coded route branding. The branding was fitted to vehicles on the two Sundays leading up to the launch of services (27th June and 4th July 2004), and thus several vehicles carried service branding and advertised new ticket prices a week before the tickets were available, which caused some confusion! 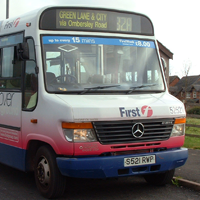 On Sunday 12th June 2005, Service 32A was discontinued due to poor patronage, and soon after the three Mercedes-Benz O.814 Vario minibuses that carried Blue Line branding were withdrawn and replaced with larger second hand Dennis Dart buses, which were quite unpopular with the public as these are the older versions with narrow, steep entrance steps. Blue Line branding was never applied to any other vehicle types. 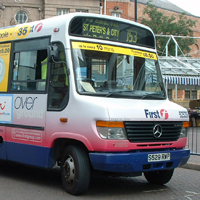 On 14th January 2005, all three of these vehicles were withdrawn and passed to First Devon & Cornwall. They were replaced on Service 35 with four Dennis Dart SLF that had moved to Worcester (Padmore Street) depot from Kidderminster depot near the end of December 2004. Three of these Darts (fleet numbers 42217, 42219 & 42220) received the yellow route branding on Sunday 20th February 2005, but this was later removed and yellow route branding is no longer used.

With the introduction of Worcester “Overground” services, fleet numbers 52517, 52520 and 52533 were fitted with Red route branding for Worcester City “OverGround” services 37 & 38 operating as a circular every 20 minutes in each direction between the City Centre, Blanquettes, Warndon, Tunnel Hill and the City Centre.

On 25th October 2004, Red Line services 37 & 38 were extended to include The Bullring, St. Johns, Malvern Road and the Lower Wick estate to the west of the city, replacing “Pink Line” Service 24. Service frequency was also reduced from operating every 20 minutes in each direction to every hour in each direction. Route branding carried on buses remained unchanged for the first few days of operation, adding to the confusion caused by these unpublicised changes. Route details shown on the vehicles were not updated and service frequency information was simply left blank until December 2004, when all the information shown on the vehicles were finally updated. The red route branding on fleet number 52517 was also removed at this time and replaced with blue branding for service 32 and 32A.

In June 2005, Services 37 & 38 were withdrawn and Red Line route branding was removed from vehicles.