Birmingham and Midland Motor Omnibus Company Limited (BMMO—Midland “Red” Motor Services) introduced Service X44 with the opening of the M5 Motorway on Wednesday 20th June 1962, as a Limited Stop Motorway Express service between Birmingham and Worcester. This iteration of the route was withdrawn on Saturday 26th May 1979, and replaced by Service M44, running over the same route as Service X44, but extended to Malvern Link, Barnards Green and Great Malvern..

The use of the â€˜Mâ€™-prefix route number for the Motorway Express service was not popular, and in c. August 1980[Exact Date Needed] the route was renumbered back to Service X44.

Initially the route and timetable for Motorway Express Service X43 and Service X44 was unchanged from that operated by MROC, but six months after the new company started trading, on Saturday 20th March 1982, both services were rerouted to run via Droitwich Spa and join the M5 motorway at junction 5, and not via London Road and junction 7. Certain journeys continued to run over the previous route via London Road, and these were renumbered as new Service X41 for journeys via Bearwood and new Service X42 for journeys via Selly Oak and Northfield.

In preparation to deregulation, Midland Red (West) Limited introduced a new timetable for the Birmingham to Worcester Motorway Express services on Saturday 30th August 1986, which saw the Worcester to The Malverns section of these routes withdrawn Monday to Saturday. The Worcester to Great Malvern and British Camp continued to be served by Service X43 and Service X44 on Sundays only.

On Monday 22nd December 1986, shortly after deregulation day, Midland Red (West) Limited was privatised and merged with Midland Red Coaches Limited to form Midland Red West Limited. Reductions to the Motorway Express services had started shortly before deregulation, and the trend continued with the gradual decline in journey numbers throughout the late 1980s.

A new timetable from Saturday 31st October 1987 saw all Service X43 and Service X44 journeys withdrawn on Sundays, for the duration of the Winter Season. Sunday operation returned for the 1988 Summer Season from Easter Sunday.

â€œMotorway Expressâ€ Service X43 and Service X44 were finally withdrawn by Midland Red West Limited on Saturday 29th August 1992, due to falling passenger numbers and major traffic disruptions being caused with the widening of the M5 from two to three lanes. 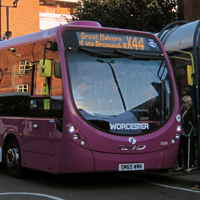 From the same date new Service X43 was also introduced, running over the same route as Service X44 between Worcester and Malvern Link, but then running via Malvern Vale to Great Malvern. While new Service X43 ran every 30-minutes on 6-days a week, Service X44 ran only a small number of peak-time journeys on Mondays to Fridays.

The service operated for just eleven months, being withdrawn after the end of operations on Saturday 15th September 2018, as part a wider range of cuts.