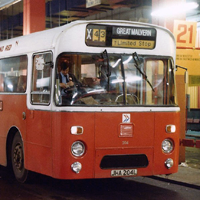 Service X43 was introduced on Saturday 20th March 1982, as a direct replacement for withdrawn Service M43, running as a Limited Stop Express service between Birmingham, Worcester and Great Malvern, with certain journeys continuing to Malvern Wells or, on Sundays only, to British Camp via Wyche Cutting.

Motorway Express Service X43 was withdrawn by Midland Red West Limited on Saturday 29th August 1992, due to falling passenger numbers and major traffic disruptions being caused with the widening of the M5 from two to three lanes. 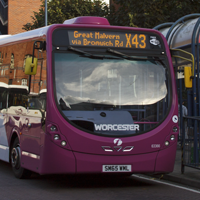 Route number X43 was reused by First Midland Red Buses Limited from Monday 16th October 2017, for a fast route running between Great Malvern and Worcester every 30-minutes. All journeys ran via Bromwich Road between Worcester City Centre and Lower Wick to give a typical two-minute saving on journey time when compared with Service 44, and also journeys omitted Malvern Retail Park to save another three or four minutes depending on the time of day.

The service operated for just eleven months, being withdrawn after the end of operations on Saturday 15th September 2018, as part a wider range of cuts.