Service 478 had been introduced by Midland Red Omnibus Company Limited (MROC) on Saturday 2nd October 1976 to partly replace routes and journeys withdrawn with the closure of Malvern depot on the previous day. The service ran between Malvern Wells, Great Malvern, West Malvern, Wyche Cutting, Colwall Green and Ledbury, and was inter-worked with Service 477 to provide a two-hourly frequency on common sections of the route. There was also additional short-working journeys between Great Malvern and Malvern Wells.

On Saturday 13th January 1979, Midland Red Omnibus Company Limited (MROC) introduced their “SevernLink” in the Malvern area with a new network of routes. Service 478 was renumbered to Service M8 at this time. 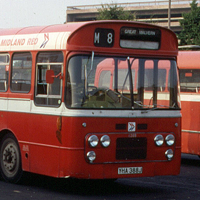 On Saturday 13th January 1979, Midland Red Omnibus Company Limited (MROC) introduced their â€œSevernLinkâ€ MAP scheme in the Worcester, Malvern and Bromsgrove areas. At this time, the network of services in Malvern were revised and Service 478 was renumbered to become Service M8 with no change to the route. Service 477 was also renumbered and became Service M7, and these two continued to be inter-worked with little change to the timetable.

Midland Red Omnibus Company Limited (MROC) ceased trading as a bus and coach operator at the end of services on Saturday 5th September 1981, and Service M8 passed to the newly formed Midland Red (West) Limited from the following day. The â€œMâ€-prefix services were operated by Midland Red (West) Limited until Friday 19th March 1982 before being withdrawn and replaced by a new network with route numbers in the 341â€“349 range. Service M7 was renumbered to Service 347 without change to the route, and Service M8 shortened to run only between Great Malvern and Ledbury and renumbered to Service 348.