On Saturday 1st April 1989, Midland Red West Limited expanded their Worcester City â€œCitibusâ€ minibus network to the Malvern area, under the slogan â€œCitibus Takes To The Hills!â€ All existing services in the area, numbered in the 342â€“348 range, were withdrawn and replaced with a new network of services, numbered in the 42, 44â€“47 range.

Initially all services in the new network were operated with Mercedes-Benz L608D minibuses, and to provide the extra capacity needed nine second-hand examples were acquired from Southdown Motor Services Limited of Brighton. However, it was quickly found that minibuses could not cope during peak times and certain journeys were soon converted to being operated with full-size Leyland National single-deck buses.

Midland Red West Limited renamed to First Midland Red Buses Limited on Friday 26th March 1999, and Service 44 is the only route from the 1989 Malvern network to have survived into the FirstGroup era.

For a short period from Saturday 31st October 1987, the Sunday journeys of Worcester Citibus Warndon Circular Service 34 and Service 37 were rerouted to run via Lowesmoor in both directions, omitting Lansdowne Road. These rerouted journeys were renumbered to Service 44 and Service 47 respectively.

This change was short-lived and within about a year the route and route numbers had returned to the ones previously used. 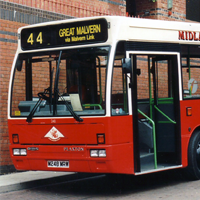 Service 44 was introduced with the new â€œsimplifiedâ€ Malvern area minibus network on Saturday 1st April 1989, as one of six routes between Worcester and The Malverns! At introduction, Service 44 was a direct replacement for Service 344, running between Worcester, Powick, Malvern Link, Pound Bank, Barnards Green and Great Malvern, with certain peak-time journeys continued to Malvern Wells throughout the week and British Camp on Sundays.

Off-peak journeys of Service 44 ran between Worcester and Great Malvern every hour, interworked with Service 45 to provide a 30-minute frequency between Worcester and Malvern Link. Short-working journeys of Service 44 between Malvern Link and Great Malvern were also provided to give a 15-minute frequency on most of that section of the route.

Service 45 was also introduced with the new network as a direct replacement for Service 345, running over the same route as Service 44 between Worcester and Malvern Link, and between Pound Bank and Great Malvern, but ran via North End Lane and Orford Way between Pickersleigh Road and Pound Bank.

There were also variations between peak-time and off-peak journeys of Service 44, as on arrival in Great Malvern most peak-time journeys would run via Graham Road and Moorlands Road to terminate at Link Top (Shelter), then return to Great Malvern and Worcester as a Service 44. Meanwhile off-peak journeys would run Victoria Road, Como Road and Graham Road to terminate on Church Road, before operating a short-working Service 44 to Malvern Link. The short-working Service 44 journeys would run from Pickersleigh Road via Spring Lane and Worcester Road to Malvern Link, allowing the vehicle to be on the correct side of the road to operate a Service 42 to Fruitlands.

Service 44 also replaced most of the Worcester to The Mavlerns section of the Motorway Express Service X43 and Service X44, although Service X43 continued to run to The Malverns on Sundays during the summer season until Saturday 1st September 1990 when they were also replaced by Service 44. The small number of Service 44 journeys that ran to British Camp during the week were cut back to Great Malvern on Saturday 29th August 1992, but they continued to run on Sundays.

On Saturday 14th May 1994 the network recieved itâ€™s first major revision. From this time, all daytime journeys between Worcester and The Malverns were run as Service 44, and evening journeys were Service 46 or Service 46A via Lower Wick Estate. The short-working journeys of Service 44 between Malvern Link and Great Malvern were all withdrawn and replaced by new Service 45 which now ran via the Retail Park and Elgar Avenue. 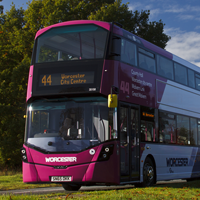 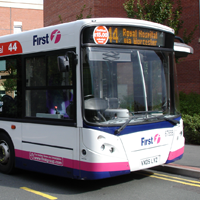 Midland Red West Limited became part of FirstGroup in 1997, and renamed to First Midland Red Buses Limited on Friday 26th March 1999. Other than the company name on the buses and a few new tickets, the change did not initially effect the operation of the Malvern services, and probably went unnoticed by most passengers. However, as FirstGroup policy slowly filtered down, major changes to all networks were bought into operation.

Service 42 and Service 45 were both withdrawn and Service 44 was standardised with all journeys running to Link Top. Later, Service 44 became â€œRed Lineâ€ service in the Worcester City â€œOverGroundâ€ network and was extended at the Worcester end to County Hall, partly replacing Service 28. For a short period it was also extended past County Hall to Worcestershire Royal Hospital as a result of funding from Worcestershire County Council, but was cut back to County Hall again when the funding ended.

The Worcestershire Councy Council contract to operate evening Service 46 and Service 46A journeys came to an end on Sunday 18th April 2004, and passed to Astons Coaches as part of the re-tendering process. Under the new contract, these journeys were cut back to run only between Worcester and Great Malvern and were operated by Astons Coaches as Service 44.

The Worcester overÂ ground network was launched on Monday 5th July 2004, and at this time Service 44 became known as â€œRed Lineâ€. Although red colour coding was used on timetables and other company literature from this time, vehicles had to wait another two years before red route branding was fitted, with Alexander Dennis Enviro300 fleet numbers 67658â€“67663 receiving the overÂ ground graphics during the first week in September 2006.

Service 44 has been extended at the Malvern end to serve Belmont and Malvern Vale, running every 20-minutes, with journeys that only run as far as Great Malvern becoming variation Service 44C.

Capacity on the route has increased significantly with the FirstGroup changes, going from one vehicle every 30-minutes in the mid and late 1990s, often a minibus, to one bus every 10-minutes today when interworked with Service 44C. These are worked by a full-size single-deck Wrightbus StreetLite Max or one of four Wrightbus StreetDeck double-deck buses bought specifically for the Service 44 route.

From Sunday 15th October 2017 a number of changes were introduced for the Malvern network of services. The most notable change was the withdrawal of the variation Service 44C and the Malvern Vale section of Service 44. The frequency of Service 44 was increased from every 20-minutes to every 15-minutes but with the withdrawal of Service 44C this was saw an overall reduction of journeys. The Malvern Vale section of the route was replaced by new Service X43, running direct between Worcester, Malvern Vale and Great Malvern every 30-minutes, with through services available with Service 44 at Great Malvern. At the same time, Service 44 was re-extended past County Hall to once again serve Worcestershire Royal Hospital, and a small number of peak-time journeys ran direct as new Service X44.

This situation only lasted for 11-months as on Sunday 16th September 2018 the network was again revised, this time with a number of cuts. A new timetable for Service 44 was introduced with Service X44 withdrawn and almost all journeys running only between Link Top and Worcester City Centre or Sixth Form College. Service X43 was also withdrawn, but a small number of Service 44 journeys terminated in Great Malvern and returned to Worcester as Service 43, or visa-versa, but such journeys were only during the peak-time period leaving Malvern Vale with almost no bus service.

The Route was split on Sunday 13th October 2019, with the Worcester to County Hall section now being run as new Service 45, with a 30-minute frequency.

Sunday working of Service 44 was withdrawn on Sunday 1st May 2022, and from the same date the evening journeys were withdrawn on all other days, making the last departure for Great Malvern from Worcester 17:30, with an additional short-working journey as far as Malvern Link Retail Park at 18:00.

In addition to the Service 44 running between Worcester and Great Malvern operated by Worcester depot, from Monday 31st March 2014, First Midland Red Buses Limited also operated a service between Hereford and Ross-On-Wye with the same route number.

This version of Service 44 was operated by Hereford depot as part of a short-term contract won from Herefordshire Council. The contract ended on Sunday 31st August 2014, and the service was withdrawn by First Midland Red at this time.