The service passed to Midland Red (West) Limited at the formation of the company on Sunday 6th September 1981. 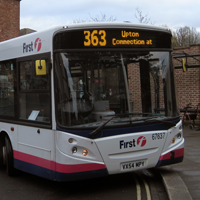 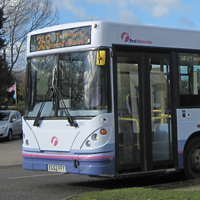 From Sunday 31st August 2014, bus services between Worcester, Upton-upon-Severn and Great Malvern are no longer supported by funding from Worcestershire County Council following heavy budget cuts. First Midland Red Buses Limited offer to continue running the Worcester, Upton-upon-Severn and Malvern group of services on a commercial basis with simpler routes that no longer change in Upton-upon-Severn, or loops around the housing estates in Malvern. As part of these changes, Service 363 is re-routed to Tewkesbury and a new Service 373 is introduced as a variation to Service 363 to serve the villages of Naunton and Ripple, with funding from Worcestershire County Council on that section of the route.

In September 2015 the funding from Worcestershire County Council for Service 373 ended. At this time, First Midland Red withdrew a number of Service 373 journeys and introduced a new timetable for Service 363 which gave an overall frequency of one journey every 90-minutes between Worcester and Tewkesbury when interworked with the remaining Service 373 journeys, which were now operated commercially.

From Sunday 10th April 2016, First Midland Red withdraw the Upton to Tewkesbury section of Service 373 and a introduce another new timetable for Service 363, giving a two-hourly frequency between Tewkesbury and Upton, and an hourly frequency between Upton and Worcester when interworked with the shortened Service 373. From the same time Service 362 and Service 364 are withdrawn and Service 363 is re-routed to run via Welland, with Hanley Castle only being served by school variation journeys to Hanley Castle High School.

On Sunday 15th October 2017, there were large changes to services in the Worcester area but Service 363 escaped relatively unharmed. The most notable change was the withdrawal of the Twyning Green variation so now all journeys run direct along the A38 between Upton-upon-Severn and Tewkesbury. There was also some minor timetable adjustments to accommodate this change.

More service cuts came on Sunday 16th September 2018, and time time Service 363 did not escape. A new timetable was introduced with all Service 373 journeys withdrawn, and most Service 363 journeys only running as far as Ryall before returning to Worcester. With funding from various local authorities, two journeys between Worcester and Ryall were subsidised for a trial period of six months. On Saturdays, only two return journeys between Worcester and Tewkesbury were operated, with no short-working journeys, giving Upton-upon-Severn only two buses in each direction.