From Saturday 13th January 1979, with the introduction of â€œSevernlinkâ€ MAP scheme, Service 144 had been extended to once again serve The Malverns, but this was not successful so from Saturday 26th May 1979 the service was once again cut back to run only between Birmingham and Worcester. 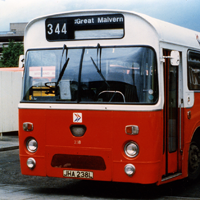 New Service 344 introduced on Saturday 26th May 1979, running between Worcester, Malvern Link, Pound Bank, Barnards Green and Great Malvern, with certain journeys extended to Malvern Wells, to partly replace the Worcester to Great Malvern section of Service 144 which was withdrawn.

Monday to Saturday Service 344 operated hourly with â€œMotorway Expressâ€ Service M43 and Service M44 being interworked to provide an overall frequency of every 30-minutes on common sections of the route.

Operation of Service 344 passed to the newly formed Midland Red (West) Limited when Midland Red Omnibus Company Limited (MROC) ceased trading at the end of operations on Saturday 5th September 1981. The service commenced operation by Midland Red (West) with the timetable initially unchanged, but on Monday 21st September 1981, certain journeys were withdrawn and replaced by new Service X51 running at the same times and connecting with Evesham and Stratford-upon-Avon, to partly replace MROC Service X91.