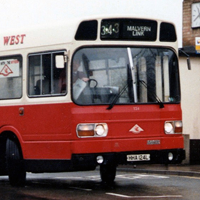 Service number 343 was initially employed by Midland Red (West) Limited from Saturday 20th March 1982 when a revision of services in the Malvern area saw the â€˜Mâ€™-prefixed local services inherited from the Midland Red Omnibus Company (MROC) replaced with a simplified network of three-digit service numbers that complemented Service 344, then the established trunk route between Worcester and The Malverns.

With the exception of a brief hiatus between November 1985 and June 1986, route number 343 was attributed to a local service within Malvern that shared a common route to sister Service 342 and was essentially an off-peak variation of that service. Between June 1986 and April 1987, the service was extended to Worcester, however this facility was short-lived with journeys curtailed back to Malvern Link after a general reduction in service between Malvern and Worcester.

By September 1988, Service 343 was nothing more than a local circular service between Malvern Link and Great Malvern, interworked with country Service 344 and Service 345. The introduction of minibuses to Malvern local services from Saturday 1st April 1989 saw the network of three-digit service numbers retired in favour of a simplified network that continued on from the Worcester â€œCitibusâ€ service numbering sequence.

Service number 343 was revived by Midland Red West Limited in April 1993, this time as an off-peak evening and Sunday variation of Service 143 between Redditch and Bromsgrove. Largely unchanged throughout the 1990â€™s, save for an extension to Catshill and minor routing revisions in Redditch, this service was typically operated with minibuses and later, examples of the Dennis Dart MPD. Midland Red West Limited (renamed to First Midland Red Buses Limited on Friday 26th March 1999) continued to operate evening and Sunday facilities along this corridor until Sunday 18th April 2004.

Service 343 was introduced by Midland Red (West) Limited on Saturday 20th March 1982 under a broader revision of services in the Worcester and Malvern areas. It replaced Malvern local Service M3, which had been inherited, along with the remainder of the â€˜Mâ€™-prefixed local services in the Malvern area, from the Midland Red Omnibus Company (MROC) upon formation of the company on Sunday 6th September 1981.

The service operated twice daily during the off-peak on weekdays with an additional journey on Saturdays, interworked with sister Service 342 which had been introduced on the same date.

The service remained unaltered until a revision to services on Saturday 23rd November 1985 saw the service withdrawn in favour of an amended Service 342 that also incorporated together most of the common sections of route between local Service 341 and Service 343. The facility was extended from Brook Farm to Malvern Link via Belmont and ultimately to Worcester at a much improved frequency.

Service number 343 was revived after a brief hiatus on Sunday 1st June 1986 as an off-peak variant of Service 342 that ran bi-hourly Monday to Saturday. This rendition operated from Worcester to Great Malvern via Malvern Link and Belmont and then continued to Malvern Wells. Journeys during the summer season, which ran until Saturday 25th October 1986, ran farther by continuing to British Camp.

The summer season recommenced on Saturday 18th April 1987 and operated until Saturday 24th October 1987. A revision to services on Saturday 31st October 1987 saw Service 343 curtailed to operate from Malvern Link to Malvern Wells only with a reduction in frequency along the Worcester to Malvern Link section of route. Services would commence from Worcester as either Service 344 or Service 345 and change at Great Malvern (although timetables contemporary to the period detailed the connection as early as Barnards Green), returning to Malvern Link via Belmont as Service 343. Most journeys would then become Service 342 and operate via that serviceâ€™s respective route. However, certain bi-hourly journeys would remain as Service 343 and return via Belmont to Great Malvern and then continue direct via the A449 Wells Road to Malvern Wells (Upper Welland Turn) or, during the 1988 summer season from April 2 to October 22, to British Camp.

Further revisions to services in the Malvern area occurred on Saturday 1st April 1989 with the introduction of minibuses and a simplified network of services, as an extension to Worcesterâ€™s â€œCitibusâ€ network. Service 343, along with sister Service 342 and peak-time variant Service 349 were all withdrawn and the routes combined into new Service 42. At the same time, Service 344 and Service 345 were replaced with Service 44 and Service 45, and Service 348 between Malvern and Ledbury was withdrawn and not replaced.

Service number 343 was reused from Saturday 10th April 1993 for an evening variation of Service 143, running between the Alexander Hospital, Redditch Town Centre and Bromsgrove.